One of the most popular television shows of the 1960’s was Bonanza, which told the story of a fictional character named Ben Cartwright. But was that character really fictional? Well, perhaps not entirely. There was a real person whose life greatly mirrored that of the television character, and that person is Toluca Lake’s founding father General Charles Forman. 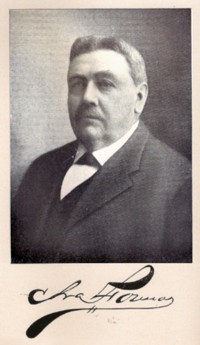 General Forman was born near Owego, New York on January 14, 1835. Forman came to California at the age of 18 by way of the difficult Panama Isthmus route, where he first settled near Sacramento and worked for Wells Fargo and Company. The frontier and the mining riches of the Nevada territory soon called him and he moved to Virginia City in 1860. Forman quickly found success through his ownership in the Meadow Valley Mining Company. He expanded his business fortunes to include a lumber mill and a large cattle ranch along the shores of Lake Tahoe.

On one of his frequent trips to California Forman met and married Mary Agnes Gray, who was a stepdaughter to the prominent John Rowland (namesake of Rowland Heights and owner of the Rancho de la Puente). In 1845 Rowland fought alongside Benjamin Wilson and Pio Pico at the Second Battle of Cahuenga. That three-day battle, which was fought at and near modern Toluca Lake, resulted in the birth of the Republic of California. Charles and Mary were married at her father’s Rancho before returning to Virginia City.

Nevada was a dangerous place in the 1860’s and Indian attacks on settlers were common. Forman enlisted in the U.S. Territorial Militia (Nevada Volunteers) and established his fame when he led a force of ninety-seven militiamen against five hundred hostile Indians. After a five hour battle only twenty-one militiamen, including Forman, were left alive – but the small force had overcame overwhelming odds to achieve a great victory. As a result, Nevada’s territorial governor, John Kinkead, promoted Forman to the rank of Major General.

In 1872 Forman saw the new city of Salt Lake as an opportunity to expand his lumber empire. Forman contracted with Brigham Young to supply most of the lumber used to build early Salt Lake City.

By 1877 Forman had amassed a fortune and made the decision to return to Los Angeles, but he couldn’t stand to part with the mansion he had designed and built in Virginia City. He had the home dismantled and shipped to Los Angeles where he reconstructed the large house (at a cost of $6000.00) on a 20-acre parcel near the intersection of Pico and Figueroa Streets.

Once in Los Angeles Forman continued his entrepreneurial ways by building an early cable car system known as the Los Angeles Cable (Car) Company. He then turned his eye towards accomplishing a seeming impossible feat of building a turbine power plant on the Kern River, which would supply electricity to Los Angeles by way of power lines that stretched across the Tehachapi Mountains. That same line of wires survives today and continues to be used by Southern California Edison to supply electricity to Los Angles.

Forman was committed to spending his late years as a “gentleman farmer” and in 1889 purchased much of the land that is modern Toluca Lake. The Forman ranch produced plums, peaches, walnuts and Moorpark apricots (yes, that’s where Moorpark Street gets its name). Forman built a home at the intersection of Toluca Lake and Forman Avenues. Situated at the end of a long dirt drive, which is current day Forman Avenue, he built a relatively small adobe ranch house along with a large barn and a “packing house” structure that fronted modern Navajo Avenue (which was then one of the several tributaries of the Los Angeles River that flowed to Toluca Lake). Along with the ranch property Forman also inherited the last Kahaweenga Indian village, situated on the bank of Toluca Lake where, until just recently, a huge eucalyptus tree marked the site and served as a memorial to the last of the Kahaweengan’s. Forman employed the Indian women as bakers for the ranch and as late as the 1920’s their adobe beehive oven could still be seen at the village site.

In 1893 Forman, along with North Hollywood’s founder Wilson Weddington, applied for the first area Post Office grant. The Postal Service required a community name so Forman chose “Toluca”, which he said was a Paiute Indian word for “fertile – or beautiful – valley”. Not until 1923 would the word “Lake” be added to the name. The original Post Office was in the living room of the Weddington house, which was then located on the present day site of the El Portal Theater. That same year, angry that Forman had chosen the name Toluca, J.B Lankershim applied for a Southern Pacific Railroad depot and had that station named “Lankershim”.

Charles Forman died at age 84 on January 9, 1919. He is buried, along with Mary and their two daughters, at the Calvary Cemetery in East Los Angeles – alongside a number of the founding families of Los Angeles. Just three months after Forman’s death, Charles Lummis and Charles Moody published a book titled “Out West”, which included stories on the life of General Forman.