Expect to hear some celebrating. Pets may need special care if they are sensitive to loud noises. Dazzling nightly fireworks displays, live music performances, specially themed décor and more, are all included in the price of admission to the theme park. 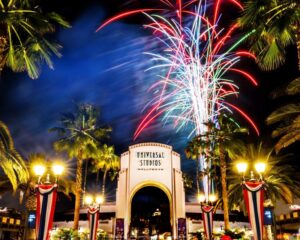 From the moment guests walk along the iconic red carpet and enter the theme park, they will be immersed in July 4th festivities from themed décor to the sounds of a fife and drum band. Then, nightly at 9:00 p.m., an elaborate fireworks display will splash across the sky, synchronized to a score of Universal-themed music and patriotic favorites from two locations inside of the theme park.

Universal Studios Hollywood continues to provide endless entertainment with one-of-a-kind blockbuster attractions; from the “Jurassic World—The Ride” mega-attraction inspired by the JURASSIC WORLD film series and featuring a stunningly realistic and fully articulating dinosaur, the Indominus rex, to becoming a stray puppy looking to be adopted on Illumination’s award-winning “The Secret Life of Pets: Off the Leash” ride and getting swept up in the excitement as you enroll in Minion training with Gru, Margo, Edith, Agnes and the mischievous Minions on Illumination’s “Despicable Me Minion Mayhem.”

The non-stop excitement continues as guests visit Springfield, U.S.A. and “The Simpsons Ride™,” take a behind-the-scenes look at an authentic working movie and television production studio along the world-famous Studio Tour, which now features several electric trams, or experience heart-pounding thrills on “Transformers™: The Ride-3D” and “Revenge of the Mummy: The Ride.”

Adding to the summer fun, guests can delight in the popular return of “The Nighttime Lights at Hogwarts Castle,” featuring an incredible light projection experience, while they Press Release enjoy the magical land, “The Wizarding World of Harry Potter™.” The program runs nightly through Sunday, August 14.

Event Dates are subject to change. Reservations are required for some events. Contact the Chamber hotline 818-761-6594 or send an email for more information Info@TolucaLakeChamber.Com

We had a spectacular event on February 9 at Santuari Restaurant, who sponsored this event.

Thank you to our members and guests who attended. Special thanks to the Toluca Lake Tennis & Fitness Club, who are also members of our Chamber. Thanks also to our Field Representatives Logan Smith of Adrin Nazarian’s Office and Tiffany Zeytounian, Field Deputy of Councilmember Paul Krekorian’s office. We are also grateful for our councilman who came to our event to support our business community. We will see him again, so be sure to RSVP for our next events.

Please support our local restaurants including our Chamber members. Santuari Restaurant will be offering a discount to our Chamber members for the rest of the year, when you make an advance reservation. Please contact them directly at 323-902-9700.

Special thanks to Parry-Riposte Films for the photography and videography.

Your local merchants appreciate your support through these strange and unchartered times. Small businesses EVERYWHERE have had to either close temporarily due to the services they provide or play this day by day adjusting hours and services provided. Please know that those of us who are open are doing everything we can to create an environment that is safe for all Tolucans.

Our lovely customers have been asking “what can we do to help our favorite small business?”

Here are a few tips: 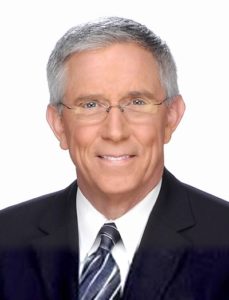 END_OF_DOCUMENT_TOKEN_TO_BE_REPLACED

Let’s start at the very beginning… In prehistoric times California had a more tropical environment. Sabertooth Tigers, Dire Wolves, Mammoths and many other animals now extinct thrived here for thousands of years before humans came to the area.  END_OF_DOCUMENT_TOKEN_TO_BE_REPLACED